because im not (that) insane, i never really thought that all of those things would come true, let alone come true pretty quickly. but thus is the miracle of life.

steven tyler of aerosmith talks about affirmations, and even though you probably should listen to old rockers who still have it, im not sure i believe wholly in the magical power of such things… but i do believe that if you really want things you should write them down, mostly because if you dont even have the guts to enunciate them then you probably dont even believe in them yourself. and you are the start of any magic trick.

super bowl friday i was late to work. because i have the best boss in the universe there really isnt such a concept. she wants me to feel comfortable so she told me to come in whenever, leave whenever, just produce and create and manage the best blogs ever. therefore i usually get in around 10am-11am, and usually go home between 8p-9p. that doesnt mean i dont have phones ringing in the early morn or emails going back n forth in the wee hours, but this is a love more than a job. so whatevs… to the max.

anyways two fridays ago my mom was nagging me to go to the post office to pick up a package she sent. every day she kept asking if i had picked it up or reminded me that it was there so even though i was running a tad late i went, murphys law i got in a long line, but got the gift. thanx ma!

rolled into the office around 11 (embarrassed) and started going thru the emails. about 20 minutes in i see an email chain from the sports editor and my boss about the fact that kareem abdul jabbar was interested in writing every day for us. the emails started at 9am. 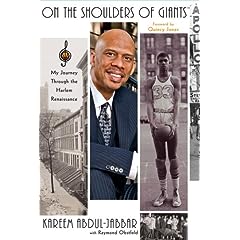 now most bosses would have called me frantically as soon as the talks started and screamed “why the hell arent you here yet!” but not mine. she totally has a gazillion plates spinning, as i do, and she omg trusted that i would handle this project that was clearly my responsibility. trust professionalism and honest communication. do you see why i love this woman?

so i contacted kareems manager, deborah morales, and we chatted for a few minutes, we agreed to meet on the monday after the super bowl at the times, and sure enough there was kareem on monday afternoon.

now over the super bowl weekend i picked up kareems latest book, on the shoulders of giants, which is a history of harlem during the harlem renaissance. totally fascinating, totally well written book. his sixth! in it he talked about jazz, and real estate politics, and race and culture, and, well, america. but in it he also talked about how he was once Lew Alcindor and how he is now Kareem Abdul-Jabbar – that he had transformed. but what caught my eye the most was how he proclaimed that he was once a basketball player and now he is a writer.

i asked him about that line when we met and he confirmed it and i said, well theres no better place for a writer than behind a computer blogging every day. and with that me and isabel and josh (both pictured) began to show him how to blog. it was an extremely interesting afternoon where we talked about jazz and sports and politics and history and writing, among other things.

it was plainly obvious that this great man, one of my childhood heroes, was just as well rounded in real life as he came across in his book, so i recommended that if all he wanted to write about some weeks was jazz, then he should write about jazz, same for politics, same for.. football if he wanted. and since we were all still in the glow of that great superbowl, our first blog post was about how much he loved the super bowl and how his famous basketball number was inspired by his childhood hero who was the blocking back for the ny football giants back in the day. like many of my friends hear me say, i told kareem “write it down!”

and unlike you and i, after he wrote it down, he just happened to have a photo of himself with the manning brothers. it was then that i knew that this would be a very very special blog.

when it launched yesterday i was relieved, amazed, proud, but mostly thrilled that this great man was starting something that very few celebrities and/or athletes do: tell their tales on the daily in public without a net. this is a man who has met pretty much everyone you can imagine. he has had unprecedented successes (after his freshman year at UCLA he never lost a game in college). and as a pro he scored more points than everyone, yes even more than jordan.

he has full license to write about anything that he wants, in any way. it’s a real blog, it just happens to be under a famous newspaper’s masthead. im pretty sure nothing like this has ever happened before – a hall of famer writing about a wide variety of topics, not just sports. which should make this fascinating for anyone.

so yeah, start writing down your dreams, and write down what you expect to do when they come true… because they just may.