drooling, asking people for help, and wearing a hospital gown he didnt have any shoes on and he stood in the middle of Vermont Ave. which is pretty busy, even on a sunday he would look over at the hospital that he was just being treated in, but the security guards and fire dudes and ambulance dudes just looked right back cars sped by, some honking some swerving he would just say to people “can you please help me?” so i called 411 on my cell phone to get the Hollywood division of the LAPD but 411 didnt have such a thing, they had a GENERAL cop number and the lady asked, “is that ok?” i said “no thats not ok, youre telling me that AT&T information who probably knows what email i have before i do, doesn’t have a phone number for the hollywood LAPD?” and she said, no we dont have it, heres the general LAPD number. i was all, hey LAPD theres a dude in the street in a hospital gown and no one is helping him, not the hospital security people, not the abulance guys – oh wait heres an ambulance – but wait – the security people are waiving the ambulance away from him – LAPD what is the deal?!? they are seeing with their own eyes a man in a hospital gown walking in the middle of a busy street and they arent helping him!” the cops said, we will send someone out. thanks.

and i went to mcdonalds because it was 10:29am and breakfast was gonna stop being served any second. when i came back the dude was still in the street and i drove into where the hospital guys were and i said wtf thats your patient out there causing people to swerve. and they said, he was discharged. i said you let people run around with no clothes on when you discharge em? he said, he didnt wanna put on his clothes, but we called the cops. i said, bros just go get him – when he gets hit you will get him. fuckers gotta get hit these days? 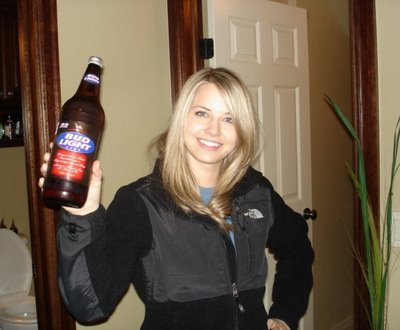 when we first met lauren she was blogging with her sister kristin on the sweet blog madpony.

if memory serves, the busblog was their first permalink which is how we found the fifteen year old and her barely legal sister.

as time has passed the girls have won awards, gone to college, gone to law school, and have turned into fine young ladies. total southern belles and beautiful examples of oklahomas finest.

according to laurens facebook, last night she purchased her first legal lite beer.

megan and i went to a gas station and purchased one budzilla after midnight. unfortunately, he did not ID me, but i offered him my ID anyway. i then did the birthday dance and flounced out of the gas station. megan took a photo with me and my budzilla. truly a memorable moment in history right here.
In this photo: product that i can buy because i am 21 (photos), Lauren

how time flies since the first time she was interviewed on the busblog.

*if you missed the madpony experience, you can catch some of it via the Wayback Machine (hint June 17, 2004 was their last post) 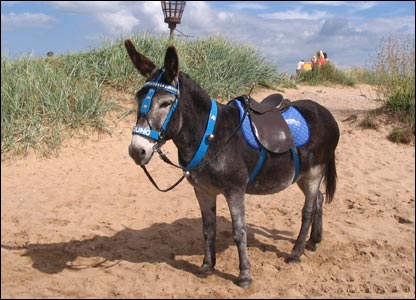 i do it because in the ten commandments it says to keep the sabbath holy. and you can say oh saturday is the sabbath or oh sunday is the sabbath, but i once talked to this rabbi who said just pick one and stick with it. so sundays my sabbath.

so on sunday i cant keep all of it holy but i can keep the part of the day when im reading the bible holy.

anyways i was reading it and out of the freakin blue this animal starts talking in the middle of the bible story. how could i not remember this story? its so completely random!:

So Balaam rose in the morning and saddled his donkey and went with the princes of Moab. But God’s anger was kindled because he went, and the angel of the LORD took his stand in the way as his adversary. Now he was riding on the donkey, and his two servants were with him. And the donkey saw the angel of the LORD standing in the road, with a drawn sword in his hand. And the donkey turned aside out of the road and went into the field. And Balaam struck the donkey, to turn her into the road.

Then the LORD opened the mouth of the donkey, and she said to Balaam, “What have I done to you, that you have struck me these three times?” And Balaam said to the donkey, “Because you have made a fool of me. I wish I had a sword in my hand, for then I would kill you.” And the donkey said to Balaam, “Am I not your donkey, on which you have ridden all your life long to this day? Is it my habit to treat you this way?” And he said, “No.”

When Balak heard that Balaam had come, he went out to meet him at the city of Moab, on the border formed by the Arnon, at the extremity of the border. And Balak said to Balaam, “Did I not send to you to call you? Why did you not come to me? Am I not able to honor you?” 38Balaam said to Balak, “Behold, I have come to you! Have I now any power of my own to speak anything? The word that God puts in my mouth, that must I speak.” – Numbers 22 21-38

dissed by yr ass. if youre not reading the bible youre missin out.

but if you are, theres some new Nine Inch Nails music for your ass

or you can call me ray

or you can call me jay

or you can call me ray jay

LAist has some of the scoop

Metafilter has some more of the scoop

or you can go to Amazon for the $5 version

me, i just want some new tom waits music

i gotta say, i sorta got over NiN about a year after all those crazy videos came out. to me it all seemed like the same song. dude screaming about some shit. keyboards getting knocked over. black hair black clothes black noise.

then it became sorta electronic and shit. i didnt get it. still dont get it. whats the big deal. cuz hes hot? how is he hot with short hair?

i heard he has a super hot girlfriend who’s deaf. thats hot. that i can live with.

maybe i will download the record when everyone has it and the bittorent is faster than it is now because who doesnt love passionate crazed fuckthelabels music?

although i didnt get In Rainbows either.

on paper radiohead is fine but im too old for fine. i want great. if God gave you the ability to play guitar then play the fucking guitar. if God gave you a face like Thom Yorke then fucking sing like you have a face for radio.

sing like you mean it. dont wimper. dont mumble. dont not look the camera right in its unblinking eye.