– in a way that looked like he was flipping his opponent the bird.

was this a seinfeld moment? was he doing it coyishly?
is that even a word?

was this a johnny cash moment? 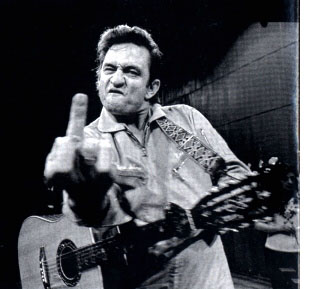 or was bro just trying to be more presidential?

my bro andy malcolm from top of the ticket asked some of these questions and instead of just answering him like normal people most of them flew off the handle (defensively, if you ask me), questioning andy’s journalistic chops for having the omg nerve to ask such a question of their candidate.

me, i dont know one person who itches their face with their middle finger.

and i know lots of people.

either way i think it was awesome.

update: this issue has seemed to have spread around the blogosphere

uk update: it appears as our friends across the pond have a finger-gate of their own

You don’t talk about him much any more. Does that mean his blog isn’t taking off? Kareem has slowly worked his way up the charts and as for April he is one of our Top 10 blogs at the Times.

he’s consistantly in the top 5 of our blogs in regards to comments, and recently you might have seen him mentioned and linked on Gawker, TMZ, NBA.com, and USA Today

recently he interviewed Carole King on his blog, and called the latest Dr. Suess movie racist.

oh and you might have seen him on the latest iPhone commercial:

yesterday was Kareem’s 61st birthday. if you wanna wish him a happy bday, its not too late.

and thanks for asking, im always happy to talk about all of our bloggers! she and i had a deal that she would blog every day and not just that but she would say something Positive every day on her blog for a week.

truth of the matter is danielle k does have a beautiful life – shes about to get a masters, shes the hottest babe in san dieger, she has a killer car, she has a beautiful wardrobe, and she is healthy and funny and pretty awesome. and i believe she has two bicycles if not three. with baskets and little bells.

but what she wants is a man. for some reason she hasnt had the easiest time finding a real man who isnt a dope and who isnt homeless and who will actually call her back after a hot date.

doesnt seem all that hard but sometimes the Lord gives us challenges. personally i think the Lord wants her to write her story down in a blawg so that when prince charming shows up and sweeps her off her feet she will have half of her story told and then she can start writing the second half and people could go awwww and know what a huge change in her life it all was.

but thats me, i think everyone should blawg. so since danielle k refuses to write, i will write for her. k? ready… go!

today i tried on four five sun dresses and i looked amazing in all of them. and as i changed clothes i caught myself half naked and damn i looked amazing in that too. so i just lazed around in my garters and matching bra. i saw a butterfly had entered my house somehow looking pretty so i took off my bra and slingshot it at the butterfly cuz only one hot bitch in this apartment and its ME. the butterfly got the hint and scrammed back into the pleasant san dieger clime.

then my phone rang. it was the pro golfer. he asked me if i had seen him at the masters. i was all yes. he said did you see me scratch my nose? i said um. he said, but danielle, i told you that when i scratch my nose it means im thinking of you. so i said, bitch if you were thinking of me id have some flowers on my kitchen table right now. and i hung up. seconds later there was a knock at the door and it was the florist and whoops.

then i picked up my favorite book, how to blog by my friend tony pierce. little does he know it but as soon as the summer starts im going to translate it in french because, have you noticed, there are hardly any really great french bloggers. thats gotta change.

later i rode my cute little bike to the market and this guy who swore he played shortstop for the padres asked me if he could take me to the game. i was all hmmm youre cute, whats your name? he said khalil. this guy looked exactly like a surfer. i said, khalil is a black mans name you big liar. and he was all but but. and i was all, later liar. and i got home, flipped on my cable tv and holy shit there was surfer boy playing short for the pads.

good thing he slipped his number into my canvas sack.

time to lay out!