dont ask me why.

meanwhile karisa was all, hi that asian hottie wasnt me. are you still drunk?

to be honest i sorta felt sick all day today. i felt like i had the flu or was coming down with the flu.

so i went to lunch with ali (left) and we sat outside and it was close to 100 degrees.

and i think it killed whatever bug was in me.

even if the bug was the hangover bug.

cuz now i feel way better and im in shorts and duane is in LA and theres a pic of karisa on the busblog and alls good in the hood.

im not sure i can tip back too many cold ones tonight with our canadian visitor but this Gaucho has to represent.

so expect a few quick shots, maybe some beers, and as the kids say up there, a visit to the rippers.

how did you guys create that nickname anyways?

meanwhile i have some good news about our Bush blog, Countdown to Crawford – for the second day in a row it was in our Top 5 of blogs, which is pretty amazing since no huge blog linked to it and since it’s only two freakin days old.

in fact while at lunch our top blogger, andy malcolm called me up and said congratulations on the new blog!

he now thinks that the bush blog is his biggest competitor, but thats not true since he secretly has no competition.

not long ago he interviewed Busblog friend, Matt Welch, in our new LA Times studios, and you can see part one of those videos here.

Expect more from the interviews this weekend at Top of the Ticket.

update: part two of the meetings of the minds has just been posted! 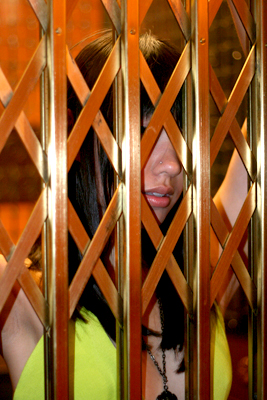 so shes lonely. and bored.

so last night i drove over to the wesssside and we ate at her favorite sushi joint. a little place called kanpai, on lincoln sorta near the airport.

because LA is amazing, you never know if the killer place is gonna be on a fancy street or in a strip mall or next to a quiznos. odds are it can be in any of those locales so dont get faked out if you ever come here.

not only does the joint have tvs everywhere (if you ever get bored of looking at karisa) but we usually end up with this waiter, peter, who is so knowledgeable its ridiculous. thats good for people like me who dont know squat about raw fish, and also for people like karisa who knows everything about anything.

dont ask me what we ate cuz i couldnt tell you. all i know is it was all delicious and we each drank a big bottle of saki and a big bottle of beer and dreamed little dreams of karisa teaching the world how to look as good as she does via youtube in the near future, so stay tuned.

one way she does it is by training for an upcoming triathlon. bitch seriously looks better than ive ever seen her and i was down with her back when she was working the hawaiian tropic circuit (pictured, left) when she actually looked hawaiian.

tonight mr duane storey comes to america. looks like we might go see rosa linda and her friends. on the way we might hafta stop by a bar because deja vu doesnt have booze and thats not very american.

there are many freedoms that we lack here, canadians, which im not very proud of, but i have a feeling that if either barry obama or the straight talk express wins they’ll give us our freedoms back.

because the first guy, being half black understands The Struggle and the other dude after being a POW understands how important freedoms are. so stay tuned on that shit too.