raymi: do you ever suffer from anxiety attacks and if so what do you do to deal i am actually having one right now.

i dont believe i have ever suffered from an anxiety attack, but when i was being recruited by the xbi they slipped something in my dr. pepper and the walls started moving after about an hour and the carpet looked like it was breathing and i started having all these negative thoughts in my head revolving around how God was soooo disappointed in me. then i fell into what sylvia plath would have considered a bell jar and i felt like i was in a tunnel that had no exit. at some point i questioned everything including if i was really alive. it was then that a girl in a green tank top dress whispered “youve been poisoned, just ride it out until things are normal again” which didnt help at the time but later i realized it was great advice. 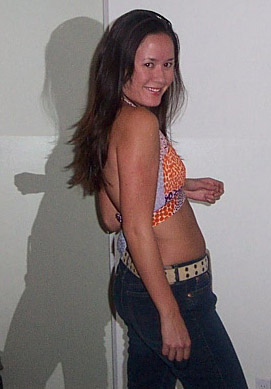 holmes: Hey man, what the hell ever happened to Meesh? http://meeshness.blogspot.com/ That chick was the bomb.

ah yes, meesh… floated into our lives, made it better, and just as mysteriously floated out. she was the real deal. and a pretty good blogger. last i heard from her she was in the rockies surrounded by pretty boys with deep pockets. sigh times a million.

alecia: can i come visit this summer?

only if you bring teh awesome that we read about on screech n bone.

g/d: need a art agent, anyone? how about you Tony?

ive only painted three paintings: “bruce sutter and i playing catch in the back yard”, “shepard and sheep dog in field of blood”, and “baby jesus in tj” and two thirds of those are in my possession. i think raymi and krista could probably use some representation though.

bigg mike: what do you suggest for an out of work reporter? mr. laist? mr la times? ps. luv your blog…

reporters should be the best paid bloggers but some of them only want to write a handful of times a week. that would be fine in a group blog situation, but if you are an out of work reporter and you think you could post 5-6 times a day, i bet you could get a gig blogging for a good number of outlets, including blogs run by magazines tv stations or newspapers. but first id recommend that you blog on a blogspot blog so you have something to show your prospective employers.

Scott T. Sterling: Sasha Grey vs. Stevie Hart. Which one and why?

id pick sasha grey. shes so intense. i dont think anyones seen anything like her. and at such a young age. its pretty fascinating. i really wanna see her new movie but for some reason the amazon preview pay per dvd thing doesnt wanna work on my mac.

rl: If you were going back to school this year what would you take?

i think i took all the right classes. i would probably just pay a little more attention.

zona: when are you gonna trade that beater in for a new car?

my beater is a beater, but the readers of the busblog gave it to me, so its kind of hard to just toss it for a hybrid or a muscle car. but the truth is im only embarrassed of it when im at a place that has valet and im standing there with all these other people and their shiny new cars roll up and mine arrives and ive gotta try to play it off. its a good excercise though. particularily because i should be riding the bus more often.

hopefully this weekend, especially since i just traded andre either for him in one league and ive got him in 2-3 others. two years ago he hit over 50. i see him knocking out 30 this year. at least!

Sharp: When will you write another super inspiring post that will get everyone revved up to blog like it’s the freshest shoes in kicksville?

keir: When will we all be able to enjoy the Case/Storey secret formula of blog awesomeness? Some of us have a professional interest in that.

from the desk of mr case came the tips, and then mr storey did the handiwork. it only took duane about 15 minutes. it was as easy as mr case described. easy if you know what the heck some of this means:

2. write down your FTP config stuff (email it to yourself) in case you need it later

3. make a “final” post to your blog at its ftp site, and maybe update the template with as “my blog has moved” link or something

4. in Settings | Publishing, change it to publish to blogspot, with “busblog.tonypierce.com” (or whatever) as the custom domain

5. then start posting to the blog at its new location.

not sure im totally thrilled that the url is blog.tonypierce.com because SEO-wise and Technorati-wise its screwing me, but on the other hand, i dont mind starting over with a far more reasonable url. plus i love how instantly things publish now.

David: Two part q…What’s your drink of choice these days and what superpower would you choose to rock?

even though i should be drinking amstel lite, i like stella, pbr, and the high life in the day, guiness at night, and baileys at last call. the superpower i would like the most is the ability to communicate in a way that others get it.

photos of meesh by meesh