Butterfly Karma: If you were a recent uni graduate would you get a grown up job and buy a house or run off traveling?

whenever you can travel, you should travel. hunkering down in a grown up job in a barbie dreamhouse is only limiting yrself. be free when youre young so you can stay free when yr old.

Sarah: Why can’t some people disappear from your life when you want them to? What’s the root of all jealousy?

there was a fortune cookie that said “what you resist, persists”. so if you want something to clear out of your path you have to clear it out of your self. the root of all jealousy is the whisper from satan that what youve got isnt perfect. for the most part you can tell the difference between satans whispers and angels’ whispers because the angels dont make you sad and mad. trust yr positive emotions, think twice about the ones that make you uptight. sass: Should I continue or stop writing Sex with Sass posts? My friends seem to be very concerned with my lack of privacy issues (for myself and my partners).

this is an excellent question because it bores down to the root of what makes a good blog and a great blog. a great blog gives the readers the impression that they are reading someones secret diary – or at least a good peek inside someones world. and what a better world than someones romantic life? however not everyone is a completely grounded, well balanced, exhibitionist who wants all their business out on someone elses blog. but ultimately, anyone who wouldnt want to get with you because you omg might write it down for a couple hundred thousand people to read probably doesnt deserve you. move to hollywood where we know everythings being documented and videotaped. blogging aint nothin compared to that.

yes and shes having the worst vacation ever.

vinny: I keep going to Vegas for vacations, should I try somewhere else and if so where?

there are so many different ways to vacation in vegas that i dont blame you for your repeat visits. holland is beautiful though. and italy doesnt suck either. 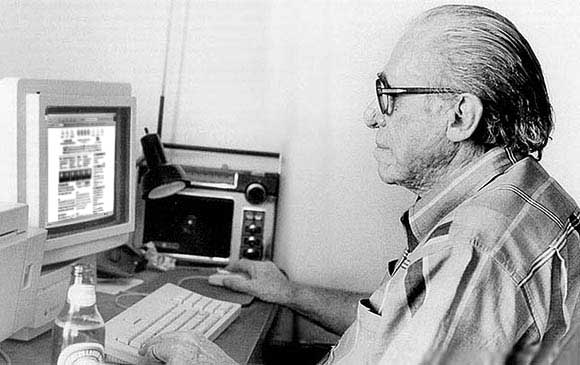 rf: Do you think Bukowski would have had a blog or twitter account if he were alive today?

even though his typewriter-produced letters and poems can be purchased on ebay for embarrassingly low prices, many people dont realize that americas finest poet was a mac user later in his life. on top of it, bro wrote and wrote and wrote. he would have been a wonderful blogger and he would definately have a twitter account because twitter fits a poet far better than a novelist.

jon: Why is ‘bra’ singular and ‘panties’ plural?

Bigg Mike: What is up with Conan’s new set? Is that the Times building to his right next to city hall? If so, how is it that the Hollywood hills are behind him? Is that vantage point even possible? Oh and did you notice he stole the backdrop for his main stage from a mario bros. video game? god i need to get a life… i looove raymi!

no the building i think youre talking about is the gorgeous wilshire bullocks (which is now a law schol). this blog did an amazing job writing about it. but no, that backdrop isnt possible in any way. bullocks wilshire is in koreatown, which is west of downtown, yet on conan’s backdrop its to the east. conan!

zona: so what’s the big deal?

the big deal is the best value meal jack in the box offers. a chicken sandwich or cheeseburger, two tacos, and a drink for $2.99. pretty sweet considering that those tacos are pretty damn great. even dudes in vans who think bobbleheads are alive like em. unfortunately it only takes place during limited times.

harris: 1. Do you feel like a fully legit staff member/journalist at the LAT, or is it still a waking dream? 1a. Will the LAT blogs eventually be the tail that wags the dead-tree dog? 2. Who is the hottest (looking/writing or otherwise) new chick blogger? 3. California: broke, or brokest? 4. Do you really still believe in the old man in the clouds white man God?

1. i didnt feel like i could call myself a Californian even after living here for 10 years. but having several of my emails leaked, being accused of being “old media”, and being constantly asked at panels “what are you going to do when newspapers die?” made me realize that others look at me as a legit staff member, so i probably should too. but its still a dream come true and i still take pictures around the building like a tourist/fanboy. 1a. the LAT blogs are simply an extension of our print product, so its all dog – no tail. if our blogs were wildly different than what we do in print then thatd be a different story. so when people are all shocked and amazed when they see the gigantic increases in pageviews online, they should just realize that it comes from the fact that the Times has always delivered great content, people are just reading it on a different platform here in 2009. 2. sass, duh. 3. when i stop seeing a bentley every day i’ll start believing all that stuff. 4. ive never believed that the old man in the clouds was white since he was born in the middle east and lived in africa for a while. katie: if you had 24 hours to live, what would you do?

id eat till i puked. then id get in a plane and join the mile high club, then id parachute into wrigley field and throw out the first pitch and get drunk in the bleachers. till i puked.

Andrea: What was the biggest transition when you went from the Midwest to the West Coast? And not linked.

not really knowing what month it was. and being able to sleep with the window open almost year round. youre now #107! one of the first really great bloggers, anti has influenced all of the great influential bloggers whether they’ll admit it or not.

his humor, his recklessness, his openness is still something many bloggers resist.

his foray into videos precluded youtube. his blogspot artistry knew no peers.

happy birthday john wayne, one of the few men i know who could make an elvis/vegas wedding and pull it from the probable jaws of cheese and turn it into one of the coolest things ever.

needless to say the busblog would be a shell of itself without the influence of anti and his now defunct blog. but his legend lives on in the pages of buzznet.