i was working at a tv network. i was a nobody. 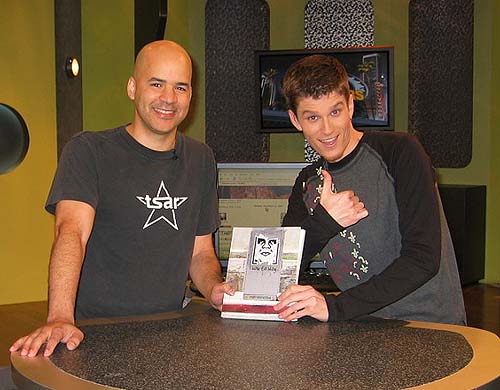 i compiled a book of some of my best posts on the busblog and crazy things happened – i was still a nobody but i was being interviewed on tv, in the newspapers, and best of all, on the web.

one of the crazy things that happened was i got interviewed by an upstart blog called LAist.

it was the first step in what would become my relationship with the new york based Gothamist empire. a relationship that would change my life and lead me to my first dream job and then my actual dream job.

6. Is blogging still an addiction? If not, then what motivates you to continue the busblog?

Yes I am still addicted. But the addiction doesn’t motivate me. What motivates me is my job is really hard and during my 15-minute breaks it’s really nice to just float away into a different world where I have total control and where people flood me with compliments and love and nice attention. I can honestly say that if I was happy in my career a few years ago there would have been no busblog.

7. If you had to make a soundtrack of the busblog, what might some of the selections include?

Tsar, “Wrong”
The Replacements, “If Only You Were Lonely” and “Kiss Me On The Bus”
R.E.M, “Superman”
N.W.A, “100 Miles And Runnin’”
Jane’s Addiction, “Three Days”
Led Zeppelin, “The Immigrant Song”
The Donnas, “Take It Off”
The Corvids, “Worried”
The Cure, “Why Can’t I Be You”
Soul Asylum, “Cartoon”
Beastie Boys, “Shadrach”

8. Has the response to your book How to Blog different from general response to the busblog itself?

Most people are aware that even a chimp can start a blog. But not until How To Blog did people realize that that very same chimp could turn their posts into a book that actually looks like a book; and then sell that same recycled nonsense and make it seem sorta cool.

Also, I wasn’t being invited to be interviewed on TV shows and the likes of laist.com until I compiled the book. However that may have just been a coincidence.

read all 28 questions and answers here. sorta crazy that was six years ago, it seems like 66 years ago.

good news is, im still a nobody :)

this is the interview that didnt happen at sxsw two years ago.

zuckerberg is so young, but hes been in the hot seat for a while now and has it down.

when people just assume that Google is going to win year after year, you only have to look at Facebook and Twitter and see that just a few really smart people can change the game entirely.

whats fascinating to me about zuckerberg and ev is they could have sold out so long ago but they resisted purely financial temptations and stuck with their babies. and now facebook and twitter are both bigger, more powerful, and more dynamic than ever expected.

and what this interview subtly talks about is brand, brand loyalty, and the trust of online company with its users very detailed personal lives.

meanwhile, neither company has ever charged its average user a penny. yet both companies are filthy with cash. hello,I’m a Chinese gilr
you know that I’m just 16years old and my english was so poor, but it was the thing that I want to told you that—nothing is impossible if you really stick to .

after looking at the IP address, and doing the olde reverse IP lookup, sure enough she be from China:

Dear China Gilr who is only 16years old.

if anyone knows that nothing is impossible it’s me. i know i forget this lesson all the time, but trust me, when i look around my many mansions and then at the mirror(s) i know the pearls of wisdom that you just laid down for me.

ive stuck to many a dream, and fortunately some of them have stuck right back.

but i heart you 16yr old chinese gilr, and when america is taken over by your nation i hope you heart me right back.