all that ever happens is the Lakers win all the games, kobe shoots lights out,
the laker girls dance around, people eat sushi and drink $11 beers,
people just go to be seen, its impossible to get a ticket, and that damn band keeps playing.

ok some of that is true. the lakers usually win, kobe love him or hate him is amazing,
and the beers do cost a bunch.

but sunday my buddy calls me up, asks if i wanna go, we go,
and for some reason phoenix is so charged up that they hit 22 of 40 three-pointers.

maybe they were turned on by David Arquette dressed like a freaky superfan.

maybe they enjoyed the twin Anchor Man attack of Will Ferrel and Steve Carrell in the good seats. also in the house was tom petty penny marshall and anthony keidis.

i dont know how much money carl jrs pays the laker girls to wear this specially customized western wear but lets just say its effective.

they had this quick change magic couple at halftime who were totally impressive.

pau gasol is a beast and shannon brown is the future.

when a team is on fire like NBA Jam, in a playoff game someone would literally knock someone down, step on their foot, or take someone out with a hard foul.

instead they just let it rain threes and what are you going to do when jason richardson gets you for 34 and channing frye drops 20? you just go home in shame.

im sure your girl keira-anne saw it and i wonder if she will be in town a few days early for the all star game for perchance she would like to catch a game? 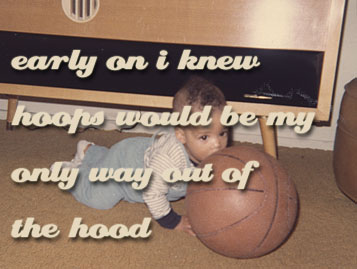 its true that early on i knew that hoops would be my only way outta the hood. and despite the fact that my mother stressed academics, erryone knew that sports is what would bring in the dolla bills, women, and wine. so in grade school i traded in my books for knee pads, put them on in weird ways, and watched the offers flow. got a nibble from various private schools, but when i learned that my local public high school only had one other black player i knew i (22) was good to go. plus i could keep playing with my main man Bobby D (24) who i’d been ballin with since kindergarten.

the rest, as they say, is history. there was a bank error in my favor.

a long lost relative died and left me a small inheritance.

i sold all my baseball cards and bet it all against zenyatta.

i saved diligently for years and invested wisely.

next: purchase a members only jacket and start dating teens again.